Orthognathic has been performed as a part of routine skeletal surgeries since the 70s. It is a scary thought to most people, as the correction of skeletal anomalies usually invokes images of doctors with saws, and even the mention of skeletal reconstruction makes patients wince in imagined pain. In reality these surgeries are as routine as tonsil removal or appendectomies; they are safe, involve a minimum of pain felt only during recovery (if felt at all), and an incredibly low risk of infection.

What Is Obstructive Sleep Apnea? 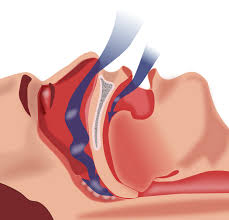 Obstructive Sleep Apnea, or OSA, is the most common form of sleep apnea. Sleep apnea is a condition in which the patient stops breathing for short breaks. These brakes can be between 10 seconds to minutes at a time. OSA is sleep apnea that occurs as a result from the airways being blocked or obstructed. This can be because of snot, a deviated septum, objects lodged in the sinuses or the airways, and a host of other things. Usually OSA is accompanied by intense snoring and has negative effects on the body. After all, not being able to breathe every night when you sleep is not that good for you.

This condition is caused by numerous things, among them old age, decreased muscle tone of the face and the area around it, or more tissue around the airway, usually but not exclusively due to weight gain. Another thing that can happen is that your craniofacial features are such that you have obstructed pathways to begin with. Those suffering from Fetal Alcohol Syndrome or Down syndrome characteristically (but not always!) have facial features that make them more prone to this syndrome. Brain injury can also result in sleep apnea.

Usually people who suffer from OSA do not know they have an issue until a parent, spouse, or partner alerts them to the fact. They usually do not understand why they cannot get enough sleep, why they have headaches when they wake up, and why waking up is so hard for them. Orthognathic surgical intervention can solve this problem, which can be a giant relief. The causes of apnea are due to the air intake coming from a very narrow or very obstructed source. The source can be widened by repositioning the jaw, to make it either a little shorter or the opposite jaw a little longer. Both the mandible and the maxilla can be shortened, this way creating more space for the in flow of air, getting rid of the short pauses, which will lead to better sleep, less trouble for those who share the bed or bedroom with the patient, and the patient will not have headaches and will get up more easily.