Bleeding gums are never a good sign. They mean that there has been some damage to the capillaries, or that there is blood present in the tissues outside of the capillaries (so called extra capillary action). But does it necessarily mean that there is some kind of problem? The answer is no, but you should still be a bit worried, and you definitely need to get it looked at by your orthodontist. But let us look at what can be causing the bleeding gums to begin with.

Sometimes gums do strange things when the braces go on. One common immune response from the gums (which are a part of your immune system) is hyperplasia. This condition is marked by an excessive amount of tissue growth in a given area. With braces, the gums can sometimes thicken and become bigger, in an effort of the gums to swallow up the braces. In these cases, the extra bit of gums will probably bleed, and this is absolutely no problem at all.

Plaque is the hardened biofilm that bacteria live in, and it sticks to the tooth surfaces and corrodes them. Tartar is the calcified, hardened plaque layer upon layer that looks like staining and discolouration, but can also just look like some tooth coloured rocks are attached to the tooth surfaces. The bacteria in these formations can cause the gums to bleed, as the bacteria do damage the gums with their secretions. During orthodontic treatment, the mouth is weakened, and so bleeding form a plaque build-up becomes more likely. 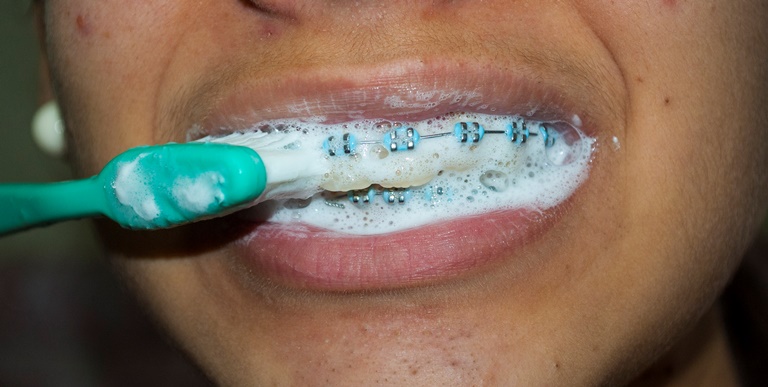 Braces are causing damage to the soft tissues

If the braces aren’t functioning properly, then you may experience some damage due to the pointy bits of brackets or wires sticking out and lacerating the tissues. In these cases, you must immediately get the offending bits removed. Try and wrap the points or jagged bits in something soft, or coat it in a layer of orthodontic wax.

Hormone levels can also create excess blood flow to the gums, and can cause extra capillary action. Sometimes medications can be the cause of these excessive hormone levels, and sometimes an imbalance, or just the workings of the body are the culprits. If you are getting treatment but are pregnant, you may experience some bleeding, for example.