Bleeding Gums: How To Treat Them With Braces

The most common cause of bleeding gums when wearing braces is gingivitis—or gum disease—and it seems to occur more often in patients wearing braces. Why?

In most cases the answer is quite simple: teeth with braces are harder to clean. The presence of wires and rubber bands are favorite hiding spots for bacteria to grow because reaching them without vigorous brushing and conscientious flossing allows bacteria to grow unchecked. That’s a recipe for gingivitis and advanced gum disease—not to mention cavities and tooth discoloration! So you must pay extra attention and step up your oral hygiene habits to combat the extra threats of bacteria and plaque buildup.

Infections Are Not Always The Cause of Bleeding Gums

But gum infections are not always the cause of bleeding gums. Sometimes, the wires of your braces have not been cut properly and can dig into your gums causing the bleeding. It might also alert us at Forest & Ray that you have extra-sensitive skin which is being impacted by the brackets and wires of the braces. This can make your mouth vulnerable to repeated infections. If the bleeding is significant, and/or you are experiencing pain, tell us. We stand ready, willing, and able to solve the problem and maybe we can try other options.

What Can Be Done To Stop Gums From Bleeding?

As previously mentioned, good dental hygiene is the best defense against gingivitis and periodontitis. Using a recommended electric toothbrush, a water pik, or stepping up the energy and elbow-grease while flossing will dramatically reduce the threat of infection and put an end to the bleeding while wearing braces and afterward.  You might also use an anti-bacterial mouth rinse. Consider asking us about that as well as the proper way to floss and brush and the suggested frequency.
We at Forest & Ray can offer alternative solutions such as a change in the type of braces you’re wearing. We offer orthodontic systems such as Invisalign® which feature clear plastic aligner trays that can be removed for activities like eating or brushing and flossing. This not only makes your hygienic routines easier but prevents food particles from lodging in your teeth and hiding there.

We Are Here To Help

Remember, though, most patients’ experiences with braces don’t always result in bleeding gums and pain. But, if these symptoms should crop up, we at Forest & Ray are experienced experts at mitigating the problems if they appear. We can show you the proper ways to floss and brush to stop bleeding gums while wearing braces so that the journey to the perfect smile is a pleasant one. 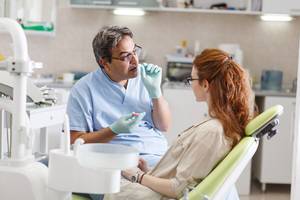 The Extensive Orthodontic Consultation: Questions to Ask Your Dentist 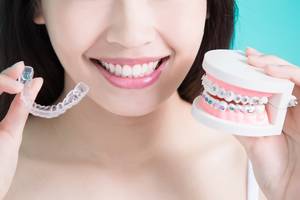 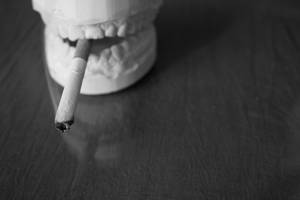 Can You Smoke With Braces?